Editors Note – It seemed fitting that I publish this particular post late on All Hallow’s Eve.  I might also mention that this essay is about dealing with death on the farm, and is probably too graphic for the queasy-stomached. (PG-13 rating.)  Please pass on this one if you’d rather think happy thoughts…RDK 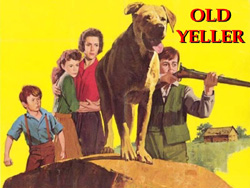 I get a little overwhelmed when I think about all the animal death passages I endured during my children’s literature stage of life.  Old Yeller got shot by his owner. Old Dan and Little Ann died protecting their owner in “Where the Red Fern Grows.”  Laura Ingalls ran to the cabin and stuck her fingers in her ears so she wouldn’t hear the pig squeal on butchering day.  Even Walt Disney children’s films don’t spare the gore; indeed, the 101 Dalmations were going to be skinned for their fur.  And don’t even get me started on fairy tales – they are chock full of swords, axes, poison and all sorts of deathly possibilities for both the animal and human characters filling the pages.

The problem with these stories, however, is that generally the fairy tales (at least those originating from England and the US) have happy endings.  Laura Ingalls got to have fun with her sister roasting the pig’s tale and making a kick ball out of the bladder.  There was something tragically sweet about the great lengths the owners of Old Yeller, Old Dan and Little Ann went to in order to try to save their beloved pets.  And of course, the Dalmations got the best of Cruella DeVille and the family adopted every last one of the orphaned pups.

There is a gap, however, between a literary youth tragedy, a cartoon or a “gently told” story of a little girl in the Big Woods on butchering day…and real life.  These stories were written for youthful audiences and therefore didn’t include the harsh realities of what death looks like up close and personal.  Those experiences came suddenly or unexpectedly in all sorts of ways while growing up on the farm.  Animal death scenes and farm life seem to go together like Alfred Hitchcock and scary movies.  There really isn’t a way to separate the two in my mind.

The stories are many so I’ll only share four short vignettes.  The first one begins at my grandparent’s farm on a day where I was innocently sent to gather eggs from the hen house.  The task is managed by opening the wooden lid of each setting box, taking the eggs left by the hen, or if she’s still there, gently lifting her up and removing the eggs from underneath her.  Sometimes hens peck at the hands entering their box and leave little tiny bleeding marks on those with more tender skin.  I never saw my grandpa’s hands bleed, but my little girl hands did quite a bit.

One day I reached into the box and felt not feathers, not eggs, and not wood.  It felt like – wait, what was that? I opened the lid further and stared at a dark mass of coils for a bit longer than I should have; the sight sunk in slowly, registering through a foggy brain clearly not expecting anything other than chickens.  It was a huge black snake and the coils filled the entire box.

I slammed the lid down and ran as fast as I could to tell Grandpa.  I don’t know how I expected him to react, but he immediately headed to the hen-house and grabbed a hoe on the way.  I followed him wondering what was in store for the snake.  He threw up the lids of the boxes until he found the snake, stuck the hoe handle in through the middle of the coils and lifted the snake up and out of the box like he had done that sort of thing before.  I backed away as he headed out of the hen-house and out to the gravel driveway.  He shook the hoe and the snake fell off.  Uncurling quickly, the snake began to slither away but Grandpa began hacking with the blade end of the hoe, chopping at the snake with a vengeance.

I watched the whole scene with horror, and then let out a scream when the visual went into overdrive.  Evidently, the snake had swallowed five or six eggs whole, and when Grandpa’s hoe hit those large lumps in the snake’s throat, its head raised about two feet off the ground, the mouth involuntarily opened up and spewed yellow yolk everywhere.  I couldn’t look anymore – I turned around and ran in the house.  The image of Grandpa hacking the snake to bits while it spewed yellow goo was burned into my brain, and played over and over in my mind over the next few weeks.

Vignette number two involved a fight with my cat.  I was up in a mulberry tree one summer, my face and fingers covered in purple juice from my harvest, when I heard a horrible screech from my cat.  I looked down to see that it wasn’t my cat making the noise, but a rabbit that my cat had caught.  The poor thing was bleeding and fur had started scattering.  The cat was eating the little bunny!  I dropped out of the tree and began chasing my cat who felt threatened that I was taking her meal.  The cat was fast, but every once in a while it had to stop and adjust the weight of the bunny she was dragging…her prey was half-dead.

I slapped at my cat.  “Leave the bunny alone!  Let it go! Let IT GO!!”  I love my cat, but I wasn’t going to let it have that bunny.  I finally caught the cat in such a hold that I could pry the bunny out of its claws and teeth.  The bunny was stunned and didn’t move.  I was wrestling with the cat, trying to hold it while nudging the bunny along with my foot.  “Run!” I told the bunny… “Run!”  The bunny finally hopped away, the cat scratched me deep enough that I couldn’t hold on any longer, she ran after the bunny…and killed it.

I remember running across that bunny tail a few days later.  I picked it up, let it dry and kept it for a while.  “Animal body parts” were fairly common on the farm.  I once found a squirrel tail (probably left after the cat ate it), I found a few rabbit feet over the years, and I would frequently find carcasses of one sort or another in our pasture.  I know there is a food chain, and I know animals do what they do.  What I didn’t know is that some animal parts look like others.

Vignette number three was especially gruesome and I couldn’t get it out of my head for a very long time.  I was skipping along one day, spied a white tail from a rabbit, picked it up and began to inspect it.  When I turned it over, I saw two tiny closed eyes and a baby mouth.  I uttered some kind of creeped-out yell, threw it down, and realized it was the leftovers of one of our new baby kittens, probably eaten by a tom cat who had come back to visit.  I had always heard that tom cats ate kittens, but had never seen tangible evidence until that day.  I felt like throwing up.  Seeing “the food chain” up close and personal, especially when it involved tiny baby kittens, was too much.  I think I probably stayed indoors for a few days.

And finally, vignette number four has to do with cows.  When you lived on a farm, it was common to have people come to your house, ask about hay,  or drive out on your property for one thing or another.  One day I looked out my bedroom window to see a white truck driving around in our front pasture.  The cows were running around and I began to wonder what was going on because there was a man in the back of the truck.  Startled, I realized he had a gun.  Just about that time he raised it, aimed at a cow and pulled the trigger.  A rifle-shot rang out and I saw the running cow stumble, then eventually fall.  I was gripping the window sill…I had just witnessed one of my cows dying!  We named our cows, for crying out loud, and we usually only kept about thirty at a time.  My stomach tightened and I sat down.  I always knew we butchered a cow or two, but I had never witnessed a death like that.  I felt like I had seen a person killed and couldn’t shake that scene in my head for another week or two.

I was recently corresponding with Becky Winsor, a childhood neighbor of mine, and we were talking about the “cow death” experience.  She was one of four sisters and wrote me her “death on the farm” story:

Growing up on a farm was, in hindsight, a very good experience. Over the years, I have put to use many of the life skills that I learned. I won’t lie, it was hard work. We raised cattle, sheep, chickens, pigs, and had a couple of horses. We also got to chop and pick cotton, bale and put up hay, and plant numerous crops.

My memories are however, for the most part, good. One of the hardest lessons I learned came when I was about 10 years old.  My father gave baby calves to my sisters and I. We were allowed to name them, bottle feed them, pet them, and visit them as much as we wanted. This went on for about 7 or 8 months. One day, we came home from school to find that the calves were gone. We were understandably upset.

When my father was questioned about this disappearance, he stated that they had been sold. He explained that we couldn’t keep the calves forever, that this was a natural consequence of raising farm animals. He had to deal with 4 teary-eyed girls for several days. He never allowed us to have our “own” farm animals again. Of course, he never again really complained about the 10-12 cats we had running around either.

What I realized when I read her story was that my experiences were not isolated.  There were (and are) children everywhere learning about death first hand on farms every day of the year.  However, I would venture to say that those lessons are never cartoons, they rarely have happy endings, and they aren’t written by a children’s author with gentle phrasing and puppy grave sites that grow red ferns.

In fact, the doggie grave sites MIGHT just end up like mine.  One day when I was running toward the creek to go play with my brother and my foot dropped about two feet down into a hole.  As I pulled my leg out I saw rib bones lying around the hole, and when I moved my shoe I saw more bones.  THEN I realized that was where we had buried our dog, Peppy, a few weeks before.  Evidently, an animal had dug her up and had her for dinner.  ARGH!  It was so creepy!!

If there is any redeeming value in animal death stories on the farm, it is that the most recent trauma usually replaces the creepiness of the former traumas.  Honestly, that’s the only good thing I can say about the subject.  Well…and, the fact that my clients can tell me just about anything in my therapy office and I’m hardly ever shocked.

Hmm…can it be that there was actually some redeeming value in all those creepy death experiences?  Naw…then it wouldn’t be a Halloween story, right?

One thought on “Macabre Encounters: The Truth About Children’s Literature and Farm Life, Chapter 3”