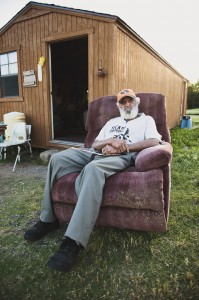 Mother’s Day Eve, 2014, was full of more emotion than I would have liked.

Rachel and I had just finished our conversation in Boley and were cruising north on Highway 48.  We were running out of daylight, and had thought we might get to Bristow in enough time to find a good dinner.  We needed to debrief; our heads were full of pieces of life that needing sorting.

Mine was full of the past 48 hours.  I had been to two hospitals evaluating a human being who had not yet finished high school but wanted so badly to end his/her life they nearly succeeded.  Rachel had finished an event for a non-profit the night before; they had been working on it for quite some time. Fundraisers tap a person’s energy reserves.  And, after having spent time in Boley I was extremely aware of how towns in Oklahoma are just hanging by a thread, and entire communities can turn on a dime…or the closing of a school.

I tell you this because the thoughts in my head were fading my peripheral vision as I drove north.  I barely noticed the “CASTLE” sign, and when I read the “IXL” sign I wasn’t even sure it was a town name.  For just a moment, though, I had been scanning the east and west wondering about IXL, Oklahoma when I noticed a man on the side of the road as we passed.

His white beard shone in the dusky light.  Seated in a recliner in the middle of a make-shift front yard, his presence intrigued me.  I mentioned him to Rachel.

“You know, our conversation with someone in IXL was right there.  We should have stopped.”

“Mom, if you WANT to talk to him, then this is your chance.  Don’t pass up something that’s right here…you might wish you had later.”

This was the difference between youth and age.  I was allowing my body to prioritize my thoughts, the first being: “I’m tired.”

There were no cars for any visual distance on the highway.  I pulled over, looked again, and U-turned toward the south.  Two minutes later, we were navigating what appeared to be a driveway on the man’s property.  As we pulled up and said “hello,” he stayed seated but appeared as though someone approaching him to talk was completely natural.  Later we found out he had sold vegetables to the highway traffic most of his life.  No wonder he seemed at ease.

Talking was also completely natural for Cleveland Dunn.  We heard stories of food, family, his father, and the Feds.  And if my head needed debriefing before we spoke with Cleveland, that need was even greater after we left.  Stories he shared took over my thoughts.  The beans and peach pits he gave Rachel and I rested in the floor board.  And we didn’t make it to Bristow earlier enough for dinner.  But we did visit another point on the Map, and I’ll never forget our conversation.

If you don’t have time to watch our conversation (below), here’s a short intro video of Cleveland thinking about how many children he has.

IXL Wiki page (not much here)