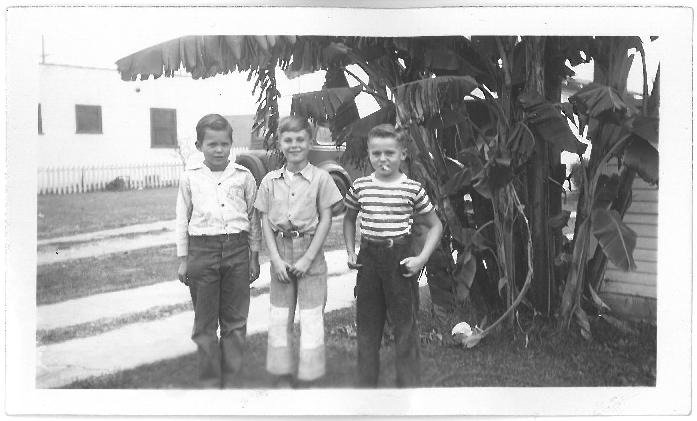 Now don’t get the wrong idea, we were basically three good kids.  It’s just that things kind of got a little out of hand that day.

Early that morning, even before the sun came up, Matt was knocking at my bedroom window.  His dad had died when Matt was two years old and his mom worked about three jobs just to make “ends meet”.  On the nights that his mom worked all night, he seemed to just show up at my house.  I opened my bedroom window and let Matt sleep in my room for the rest of the night.  My parents were really cool and didn’t really mind…they liked Matt a lot anyways.  That morning we woke up to my mom screaming for joy.  My dad had given her a new camera for their anniversary.  My dad had always told me that he knew how to make a woman happy.  Hmm…I guess he did.  As I sat down to eat some cereal, I noticed Matt eating out of the box and drinking milk from the carton…”hurry up dude, you’re wasting time”, Matt yelled at me.  We finished up and headed outside.  As we opened the front door to step outside, the sound of gun fire went off.  Matt and I launched ourselves onto the front porch deck covering our heads.  It seemed like forever before the noise stopped.  We looked up and we saw Johnny laughing, “you two are a couple of girls”.   Johnny, the joker of the bunch, had rigged my front door with a bunch of black cat fireworks.  Matt yells, “Dog Pile” and we commenced to tackle him and give him a monster wedgie.

Once we got through rolling around on the ground, we headed for the old cotton mill bridge.  I don’t know what it was about that old wooden bridge, but it seemed like the place where we always started our day.  The old mill had been abandoned for as long as I can remember, but the bridge was still in use.  It was pretty cool; it was one of those old wooden tunnel bridges.  We use to screw around underneath that thing for hours.  At times you would see some smaller vehicles cross it, but I’m not sure I would have tried to drive a truck over that old thing.  When we got to bridge we knew there was going to be trouble.  Four punk kids from the next town over were in the middle of the bridge throwing rocks at the old cotton mill.  Not that breaking the windows to that old place really mattered, but it was the fact that we pretty much thought of that place as our own.  Johnny, being the “outspoken one”, yells at the biggest kid in the group…”hey fat ass, you throw like a girl”.  Matt, being the momma’s boy of the group, basically slid behind me and made himself look as invisible as humanly possible.  I was like, “great Johnny…here we go again” and the time last summer when we got in a fight with the Hennessy twins suddenly flashed before my eyes.  I’ll still have bruises from that fight…damn those girls fought dirty.

As the four boys slowly walked toward us, I noticed Johnny kneeled down and got some sort of “make-shift” contraption out of his back pack.  Knowing Johnny the way I did, I knew this was about to get really exciting.  As the boys came closer, they got louder and more vulgar.  I told Johnny…”whatever you got planned…you better do it quick”.  That’s when I saw the lighter…then I heard him say, “you guys better run…this is going to be loud”.  Johnny lit the device and threw it in the middle of the pack of boys.  The boys weren’t to the end of the bridge when they saw the lit make-shift bomb and they scattered quick.  One took off to the right, one went left, one went straight, but the fat loud mouth wasn’t so lucky.  BOOM!!!! It was LOUD…the ground shook, the mill windows rattled, and I could swear I saw a mushroom cloud.  It was the loudest thing I had ever heard.  The three of us hit the ground laughing our butts off.  As our laughter halted we heard, “hey…where’s Bobby”.  It was then when we all three realized that we never saw the fat kid run.  Was he dead?  Did Johnny blow him up?  We didn’t know, but we knew this was going to be bad.

At that time, the three of us and the three punk kids started to make our way back towards the cloud of dust.  Then we saw it…Johnny’s make-shift bomb had blown a hole right through that old wooden bridge and the fat kid had fallen down into the creek bed.  “You guys killed him!”, one of them said.  “Good”, said Johnny.  As we made our way down to the creek bed, we saw he was laying half way in the water and completely covered with mud.  “Check his breathing”, Matt said as he bends down to pick up one of the kid’s shoes.  One of his buddies leaned down and put his ear next to his mouth.  “Good…he’s breathing”.  “Too bad you girl!!!”, Johnny said, with a slight kick of dirt on the poor boy.  After several attempts of his friends trying to make him “come to”, the kid’s eyes opened.  “What happened, am I dead?”, he said.  “These jerks tried to kill you”.  The three of us stood up and gave him a nice sarcastic “golf clap”.  Looking up at us from flat on his back, the kid points and mumbles a few slurred words.  Not even understanding what he said Johnny barks back at him, “you want more you girl?”

But the next words out of his mouth we did understand…”Truuuuuuuck!!!”.

We all looked at each other in total fear.  We already knew that old wooden bridge could barely support a regular sized car, but here comes this moving truck, and on top of that, Johnny just blew a huge hole in it.  Matt and the other three boys all grabbed an arm or a leg and darted down the creek.  I hurried up the creek side wall as fast as I could thinking, someone had to stop the truck from crossing the bridge.  By the time I made my way out, it was too late.  The truck was already half way across the bridge.  I ran to the opening of the bridge and started to wave my arms yelling, “STOP”.  Not sure if it was my yelling or if the driver saw the huge hole in the bridge, but he stopped the truck and got out.  “hey kid…what’s your problem”, he yelled at me.  I yelled back at him, “dude!, the bridge is going to collapse…run!!!”.  The bridge creaked as the flooring started to give way.  The trucker turned and ran towards the other end of the bridge.  Just as he made it to the other side, the entire bridge collapsed into the creek bed.  As the trucker and I stood there and stared at each other across the bridgeless road we could hear the faint sound of a congratulatory “golf clap” from the boys.  I thought to myself, we are in big trouble.  Should we run, should we stay and face up to our mess.  We decided to stay.

By this time the fat kid had made his way back onto his feet and the boys were all walking towards me to make their way out of the creek.  I convinced them all into not saying anything about the bomb and just see what happens.  By then the trucker had made his was down his side of the creek, out, and up to us.  “you boys OK?”, he asked.  Johnny says, “hell man…you about killed us all.  Don’t you know that old bridge won’t hold your big ass truck!!!?  Looking down at his fallen truck he says, “I’m sorry guys, but what the heck am I going to do about all those pop bottle rockets I was hauling”?   We all looked at each other and smiled.  Not even saying a word, we all knew how lucky we were.  Johnny looks at the fat kid and said, “you ok?”  “Yea, I’ll be ok”.  “See you tomorrow”, Johnny says.  The fat kid replied, “I’m not sure, you guys play pretty rough”.  As we started to walk back home, I looked back.  I could see two of the boys helping the limping kid along and the truck driver was still standing there staring at the bottom of the creek.  I put my arms around my friends and smiled.

Now as I sit here staring at this old picture, I can’t help but think about all the great times we had together and how I throughout my entire life, I never found any friends as good as I had when I was ten.

About The Author:
John Hare is a Senior Regulatory Coordinator for Oklahoma Gas & Electric. A 39 year old family man that enjoys spending time with his wife, Carrie, and his three kids, Colton, Ashton, and Donovan.

Authoring For The Imaginary Family Project:
Oops!… we are temporarily oversubscribed.
We’ll open this project up for new Authors later this year.

About The Imaginary Family Project:
The 2011 Imaginary Family Project is a year-long collective art endeavor coordinated by occasional amateur artist Quentin Bomgardner and co-sponsored by The Red Dirt Chronicles.  This project is based around “lost” vintage photographs, which have been acquired at flea markets, garage sales, estate sales, and eBay – heirloom collections, with no heir.  Every week a different author will “find” one photograph by creating an imagined history around one of its subjects.  At the end of the year, the collection will be compiled and presented as a group.