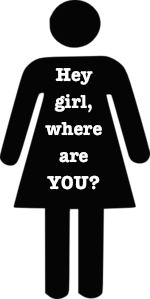 We have a gender problem in Oklahoma.  And when I write “gender,” I also mean sex.  Sex in that there are some male/female balance issues.  But gender, in terms of societal and identified population self-defined roles.

Okay, the majority of these problems exist no only here but across the United States. The lack of answers, however, don’t effect me as much as they do locally.  So, I figure…start here, and work outward.  It’s always easier to change yourself than it is to change someone who lives 2,000 miles away.

The reason the Red Dirt Chronicles was created was to highlight various aspects of Oklahoma culture, and to share the ideas and work of authors who are Oklahoman.  But we have problems in Oklahoma just like any state and one of the most notable to me, right now, right here, is our lack of female legislators.  And, our lack of male human service employees.

First, the legislative problem.  Although we now have a state that is well over the ten percent mark (and some would argue hovers around the 15% mark) in Hispanic populations, our legislative body not representative of this fact.  Other ethnicities (Black, Asian, American Indian, etc.) are equally under-represented.  However, our Oklahoma population is roughly half female, but we only have (according to an interactive map deployed in 2009) 13% female legislators.  So, if you calculate the disparity in percentages, women are quite possibly the most underrepresented demographic of all. Want to know more? Read this.

I’m not going to write an argument about what a greater percentage of women could add to our state management, lawmaking and problem-solving process.  I think you know the answer to that if you just sit down and give it some thought.  I’m just pointing this out because if one person who reads this considers having a discussion of how to get more women into our governing body, then the deployment of this post was successful.

But the lack of women legislators isn’t the only gender problem in Oklahoma.  There are many more and I will probably write about others in the future.  Today, however, I want to point out the lack of men in the human and social services careers.  I just completed an eight year career training Child and Family Services students for their professional lives.  I coordinated approximately 100 interns per year (800 total) who went into the field of non-profit work, social services work, family life education, etc.  Of my one-hundred students, I generally had between two and four men per year.  The rest – a full 95-96% were women.

These facts are undisputed and cannot be changed.

So, ladies: Please think about entering public service by running for House and Senate seats in the State Legislative body.  Men, please consider working “with the people” who need help to find ways to help themselves.  A better balance creates better environments, better solutions, and better perspectives.

6 thoughts on “We Have a Gender Problem In Oklahoma”