College football is full of rivalries, and there are some great ones…

Michigan/Ohio State has tradition, but hasn’t been worth much the last few years.  The Iron Bowl between ‘Bama and Auburn is the best of what the South has to offer, but it still misses the mark.  Oregon and Oregon State call their battle the Civil War, but something about Ducks fighting Beavers just doesn’t inspire me all that much.  Bedlam is up there for sure, but you get the feeling it means just a little more to the side in orange.

OU/Texas is the gold standard in rivalries and here are the reasons why.

The Cotton Bowl is the perfect setting.  It’s almost exactly halfway in between Norman and Austin.  The stadium is split at the 50 yard line.  Sooners on one side, Longhorns on the other.  Show me another event like this in all of sports.  Go ahead show me.  You can’t do it.  The atmosphere alone makes this game what it is because you can feel the tension in the stadium and all around the fairgrounds.  Nothing but burnt orange and crimson as far as the eye can see.  The Texas State Fair is part of the experience.  Ride the ferris wheel, win a teddy bear, eat something fried, eat something else fried, almost get sick, drink beer, feel better, watch football.  If I’m not mistaken that might just be the meaning of life right there. END_OF_DOCUMENT_TOKEN_TO_BE_REPLACED

One of my favorite movies as a child was The Alamo.  I remember this Hollywood version of Texas history very well. I don’t think historical accuracy was a major goal of the director, John Wayne, who also starred as Col. Davy Crockett.  I remember watching Santa Anna’s Mexican army sweep into the Alamo and there was big John Wayne, swinging his Kentucky long-rifle, gallantly fighting to the last. 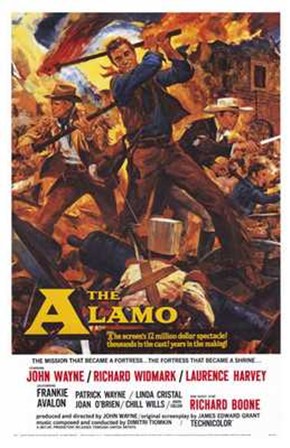 Before the final and climatic battle there was a romantic scene. I’m talking about girls and kissing and yucky stuff that eight year boys can’t stand. I’m talking about ‘kid romantic’; I’m referring to a kid who loved Daniel Boone, Superman,  and six-shooters.

The Most Romantic Scene:  The ‘Texacans’ and other Americans were gathered inside the walls of the Alamo. Col. William Travis (Laurence Harvey) stood before them and explained the situation looked bad, real bad. They were tremendously outnumbered (7,000 to 185) and no help was on the way.   Colonel William Travis is hoping to give Houston the time he needs to pull his forces together.

Travis speaks to the men who have been defending the Alamo. He tells them there will be no shame if anybody wants to leave.

Richard Widmark, a real Hollywood tough guy plays the role of Sam Bowie. For some reason lies on a blanket unable to stand. In the most remarkable and indelibly imprinted movie scene of this eight year old had ever seen, Col. Travis draws a line in the sand.  If you cross that line in the sand, you are saying you’ll stay no matter what. Nobody moved.

Then, Sam Bowie, laid out on a blanket says, “Carry me over boys,” or something like that. Then all the other Alamo defenders step over the line. I’ll never forget the image of that line in the sand.

WHAT’S YOUR LINE IN THE SAND?

I looked it up.  END_OF_DOCUMENT_TOKEN_TO_BE_REPLACED

Most batters don’t even see the fastballs that leave the hands of Owasso’s Dylan Bundy and Broken Arrow’s Archie Bradley.  Most pro scouts were left drooling as they watched Bundy and Bradley mow down the opposition and looked in astonishment at radar guns with readings in the high 90’s.  Most baseball fans will never see talented arms like these come through Oklahoma ever again.

June 6th, 2011 was a historic night in this state as Bundy and Bradley were both selected in the first round of the Major League Baseball Draft.  Bundy, who just days before was named Gatorade National Player of the Year, was taken fourth overall by the Baltimore Orioles.  Bradley, fresh off a win in the state championship game, was drafted by the Arizona Diamondbacks with the seventh pick.

“Watching the NFL and NBA draft, you see all these guys and the excitement but you don’t fully understand it until you go through it,” said Bradley moments after hearing his name called and donning an Arizona hat. “Going through it right now it’s simply amazing and to be here in this moment with my family, friends and coaches that have helped me to this point, it’s unreal.”

Bundy’s older brother Bobby was drafted by the Orioles in 2008.  Dylan said he can’t wait to play alongside his brother and can’t think of a better place to start his professional career.  “I really can’t because I already know a lot of things the Orioles have to offer and with him right there by my side the whole time will be great.  Secretly, in the back of my head I was like I really want to go to Baltimore to be with my brother, that was my dream and it’s been a dream come true so far.”