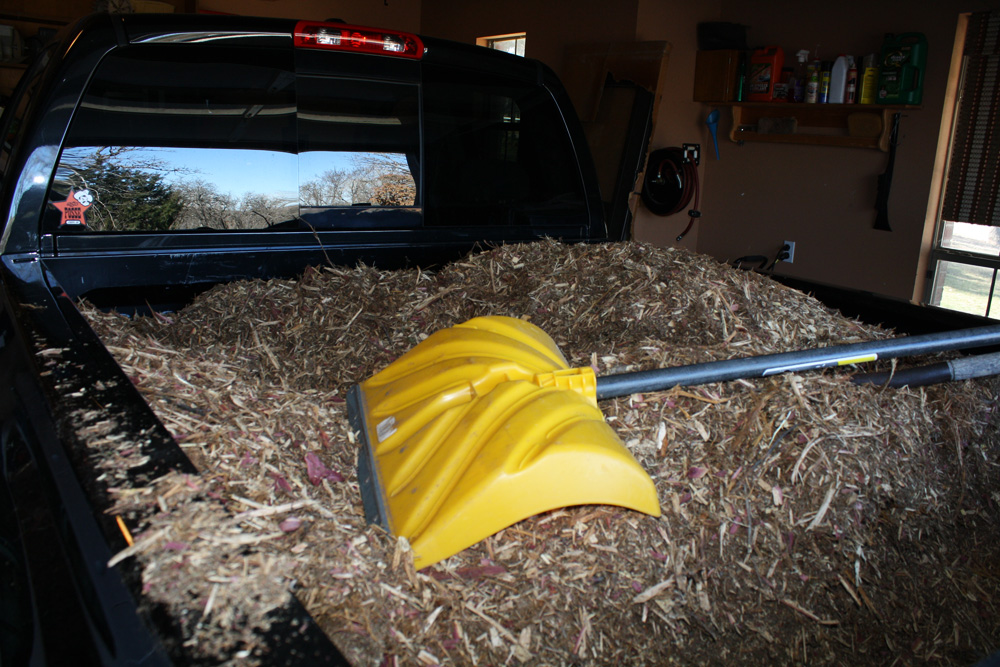 When Mick pulled into the garage on Saturday afternoon, the whole space immediately filled up with the beautiful smell of freshly chipped cedar mulch.  It was slightly damp, which was making the aroma stronger.  I think I walked into the garage three or four times that evening just to sniff the air.  Mick had made three trips to pick up free mulch that day, and had evidently talked to “the mulch guy” during each trip.

We built our house in the cross-timbers of far NE Edmond about eight years ago.  The territory out here is more spread out; a former farming community taken over by suburbanism.  But a few farms remain among the housing developments and one of them belongs to Bud Manning.  He lives on the NE corner of Sorghum Mill and Midwest Boulevard, just north of the Christmas Tree and Blackberry Farm.

According to Bud, “a few years back, some company was out here buildin’ or somethin’ and they were grindin’ trees on the properties.  They wanted a place to dump the wood chips and asked me if I needed any.  I said, ‘Nah, but you can just pile them back here on the back of my property, and then I’ll put a sign up for whoever wants tuh come and get them.’ And, well…they brought a big backloader, and piled the chips waay high, all nice and neat. And then they left.”

After hearing some of Bud’s stories through Mick I needed to meet this guy.  He knew about the farms, gardens and neighbors in the area over a much longer history than Mick and I had experienced.  In other words, Bud was an expert on his territory.

So there I stood, on Sunday afternoon, out in the middle of the free mulch piles that had been going for at least eight years.  And possibly longer.

Bud was talking and I was listening.  And I’m pretty sure none of the stories he told me were the same ones as I heard from Mick.

While learning about how the “FREE WOOD CHIPS” operation got started, I also learned that Bud had served in the armed forces.  He “didn’t have much education.”  When I told him that Mick’s grandpa had finished the third grade he said, “That’s what I did.  I finished the third grade.  Same as my daddy.  But he could figure as sharp as any man I knew.  He could just look at land and calculate how many animals or what kinds of crop yields he’d get.”

Bud wears hearing aids, and professes that he can’t see to drive.  But he can sort of see a little bit, so he still drives his Honda.  And, he’ll drive his Honda out to the “wood chip pile” every time he has a visitor.  So the social contract is this: free mulch; payment = one conversation with Bud.  It’s a pretty good deal.

He might tell you about his Honda.  He bought it in 1985 and it’s been a great tool for the farm. 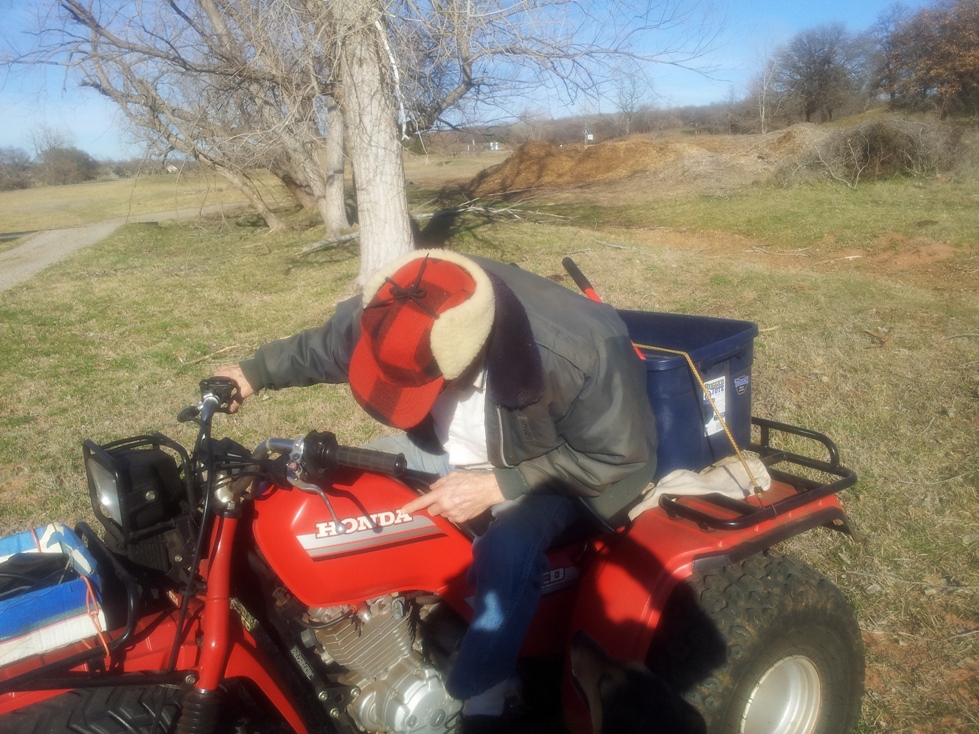 Or, he might tell you about the “good guys and the bad guys” he’s dealt with over the years.  The “Good Guys” are the tree mulchers who grind up the product very nicely and don’t leave big ol’ pieces in it that no one can use.  They also reshift the piles of mulch and keep them nice and neat.

You can guess the “Bad Guys,” right?  They leave big holes in the mulch piles, dump it haphazardly, and leave bad product that no one can use. 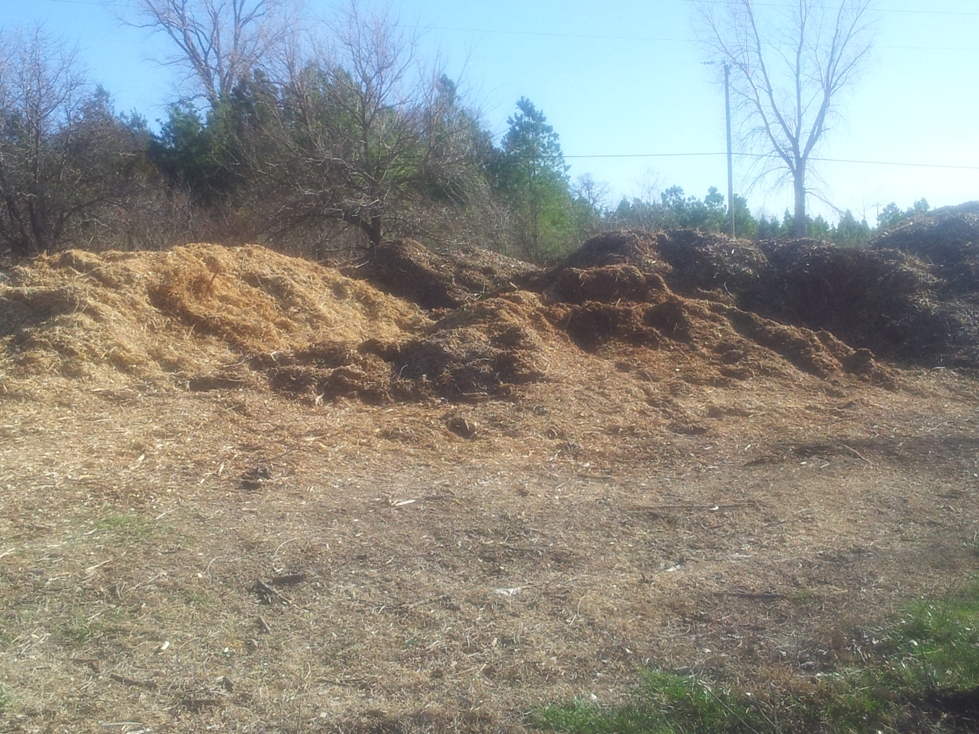 “Things are in pretty good order right now, and you can pick out whatever kind you like.  We got at least four different kinds of wood chips, see?  And when they scoot it around to re-do the piles, and it’s been sittin’ there all winter, the dirt is just as black as it can get.  It’s just beautiful.”  One of the first things Bud told me after saying he couldn’t hear and he couldn’t see was that he “wasn’t gonna stop…you just shouldn’t stop…you gotta keep going, and I’m gonna keep going for as long as I possibly can…”

So, Bud goes on his Honda. He greets his “customers,” talks to them until they’ve filled up their trucks or trailers or buckets, then goes back home. Until someone calls again. 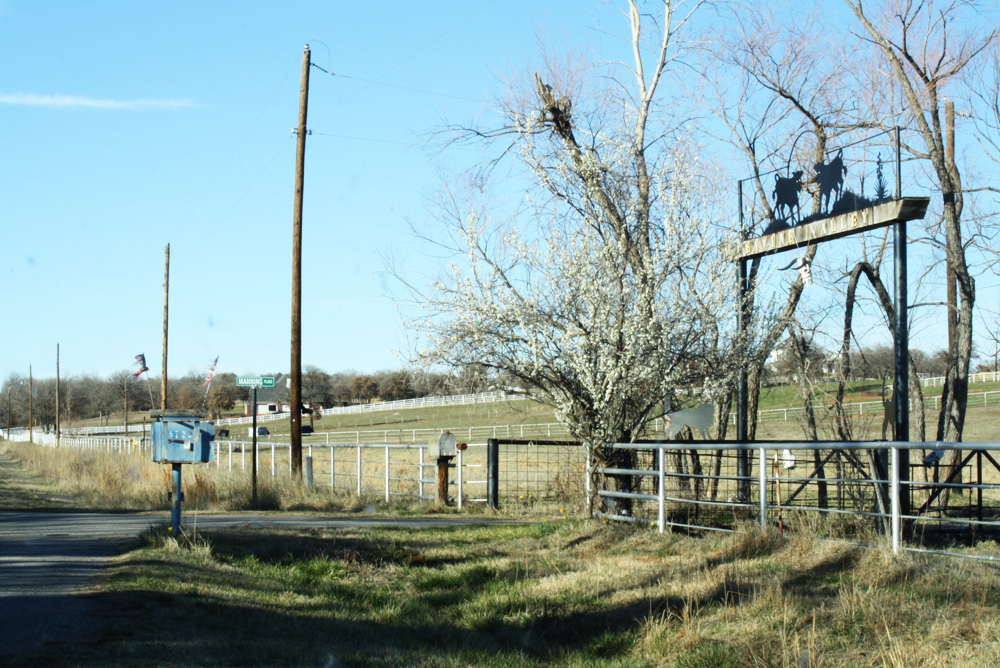 When you drive by Bud’s house, you’ll see two tattered flags sticking out of his mailbox arrangement.  There is a welded gate with a cattle sculpture on top, and a modest setting for his farm.  Bud is a modest person too.  But if you listen long enough, you’ll hear, among the neutral narrative of his life, heroic feats.  At one juncture in his life, Bud and his wife became the guardians of their granddaughter, and “she was his shadow for years on this Honda, but now she’s goin’ go college next year…gonna be a dentist.  She makes the best grades in her class.  She came out to the house today, and has stayed with us all afternoon.”

There is something special there.

Bud takes care of his free wood chip operation, and he’s taken care of his granddaughter until she was ready to go out on her own.

There are more stories; some that feel very private, so even when you tell Bud you’re writing a post about him, they’re stories you choose to omit.  Then there were some that made my spirit kneel in deference to this man who has lived a very full life.  And some that are kind of long-winded.  But all are stories of a man who “won’t stop…,” who will keep going as long as he can.

And, he’ll take care of you should you decide to do something like we did…mulch all the flower beds, mulch trails on your property, mulch muddy spots in the yard, etc.

But plan on staying for a few minutes.  Bud will probably have some stories to tell you. And, you’ll probably be glad he did.